I do not engage in so-called social media. Altogether, 2 websites and private e-mail comprise the extent of my cyberinput/output. NO cell phone -NO Instagram -NO texting

Moses E Hoskins was born in 1953 in Iowa where he spent his youth and some time as an adult.  He was educated in public schools and attended a few colleges in the Midwest before attaining a BFA from The University of Iowa School of Art & Art History later on in 1981 in what could be construed as a last ditch effort at Formal Education.

Residing in New York since 1988, Hoskins exhibits in a variety of venues. He exhibited regularly in NYC at OK Harris from 2000 until the gallery closed in 2014 with the death of its eminent founder Ivan Karp. Hoskins' work is now included in White Column's Artist Registry, New York and actual work by Hoskins can currently be seen at Robischon Gallery in Denver.

As a visual fine artist with roots in figurative rendering Hoskins has worked abstractly and/or nonrepresentationally since the mid 80's. He is a recipient of multiple grants from The Adolph & Esther Gottlieb Foundation and also from The Pollock Krasner Foundation, and he was a guest at Yaddo in 2010.  Development continues, possibly influenced, obliquely, through mundane life experience, occasional world travel &/or the passage of time... but mainly, his work doesn't really have much to do with anything.

This site features work produced since 2015. To make inquiries or to see work from before 2016 contact moseshoskins@mac.com   - higher resolution images/jpgs and prices available upon request 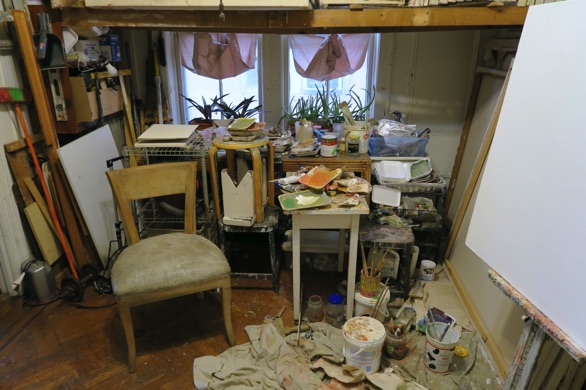