as an introduction to Hoskins and his work: HuffPo Interview 12/29/15

2018     work on canvas in an introductory display on the office wall at Giampietro Gallery -New Haven, CT >

from 57w57 press release: This striking body of work serves both as an aesthetically tactile curio as well as a fascinating anthropological record. Hoskins has created a sprawling chronicle of densely layered materials and imagery. Each edition or book within the collection acts as a visually compelling document of time, preserving the definitive materiality of a moment while revealing the transient nature of all things.

Mr.Hoskins is a consumate abstract artist. He is extremely proficient in any medium he takes on. In his works, he demonstrates an innate feel for color, texture, line and movement. His works reflect a vibrant intelligence and sensitivity -and because of this, His paintings and work on paper transcend the often staid sphere of abstraction. -Suzanne Kreps, director and archivist at OK Harris

As an abstract painter, Hoskins is a bit of an enigma: his work is not easily placed into categories that the critical lexicon has established since the second world war with the sudden, spectacular rise of non-objective painting in America.  His work is too opaque and perhaps a bit too blunt to fit in with the Color Field artists such as Helen Frankenthaler or even Sam Francis.  The pastoral lyricism of his palette keeps him at arm’s length from the rowdier exponents of Abstract Expressionism.  Not finding an easy frame of reference for understanding the work, some critics have resorted to making a comparison with the late work of Richard Diebenkorn:  those fragile arcs and incised lines floating in between misty skeins of washed-out color do bear some superficial resemblance to the Ocean Park Series.  But the light and atmosphere that is being evoked in Hoskins’ paintings seems all wrong for that comparison to stick for very long, once you see the actual pieces themselves.  Such comparisons are a bit like trying to write about music:  Beethoven is to Brahms as Mahler is to what? Miles Davis is to Funk as BeBop is to (fill in the blank).  As it happens, I often find myself thinking of jazz when I look at a good Hoskins painting or collage. -Harold Graves / from Harold'sSketchbook

2011     Gillette Gallery at the Garrison Art center in Garrison, NY

A given Hoskins canvas or collage may seem to begin as a geometric study, but ultimately gives

way, playfully and energetically, to expressionistic gestures, lines and mark-making.

... each piece of cardboard or paper detritus retains some elements of its origin. It’s a crafty

...Mr. Hoskins uses an assertive approach to surface and line in his abstract compositions,

Mario Naves Currently Hanging / The New York Observer, October 15, 2001: Collages That Stray From Diebenkorn ...a searching equanimity is yoked from the diagrammatic and geometric. Breaking the rectangular format Diebenkorn assiduously honored, Mr.Hoskins pursues what we’ll call pure collage -that is to say an art of material, not illusion. Hoskins combines old envelopes, labels and things the rest of us toss in the wastepaper basket with an appreciative eye for contrast, gently pitting smooth surfaces against wrinkled ones, staples against Scotch tape, clean forms against rough edges...

-from Scott Speh's Hot Commodoties,12 Views at Drawing Center (Soho), fall 2001: Yet another intriguing Selections show at the Drawing Center! I love Moses Hoskins’ dirty collages. They look like Richard Diebenkorn and Richard Tuttle were collaborating in a dumpster outside Office Max, as Hoskins incorporates paper, envelopes, boxes with acrylic, ink, pencil and "diverse tapes" in fresh-funky abstract assemblages.

Waterfront Week, Volume 7.6 Mar 27-April 9, 1997 Artburger especially liked Book of Debris by Moses Hoskins, literally an archeologic/ecologic study of the debris on Canal Street that provides ample material evidence of the sweatshops, Chinatown, and fastfood. There is also the irony of carefully turning the pages of a work of art that would be untouchable garbage on the street.

More Fuel for the Debate on Abstraction by Vivien Raynor/ New York Times, Feb.18,1996 Moses Hoskins nudges along the tradition of collage that was established by Kurt Schwitters with two aptly named "Books of Debris".

Hoskins creates a cascade-like fugue that dominates each work liken to a figurative contour remembered.  Hoskins is adding and subtracting visual data either to restructure or cripple the whole, keeping wide of being dull, until the combined impulses have angled out a mettlesome potential balance. An intuitive feel for balance point construction yields variables Piero della Francesca would envy.  -Don Doe / SRO Gallery press release for group exhibition Unextinguished / The Episodic Landscape, January 2019 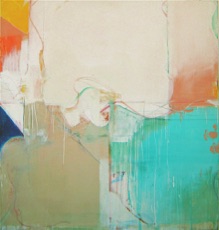 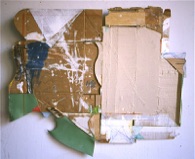 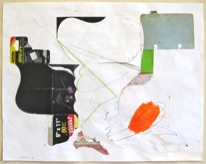 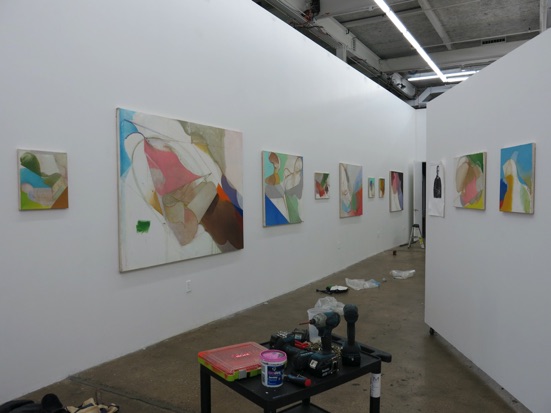 Moses E. Hoskins was born in 1953 in Iowa where he spent his youth and some time as an adult. He was educated in public schools and attended a few colleges* in the Midwest before attaining a BFA later on in 1981 from the University of Iowa School of Art and Art History. As a visual fine artist with roots in figurative rendering he has worked abstractly since the mid 80's. Residing in New York City since 1988, Hoskins exhibits in a variety of venues. He is a recipient of grants for support of his work from the Adolph and Esther Gottlieb Foundation and also from the Pollock-Krasner Foundation.** He was a guest at Yaddo in 2010.

*colleges attended prior to the University of Iowa '79- BFA'81 include:

< a satyrical self portrait,1972 graphite, acrylic & gold paint on gesso on a barn board

Note: Most work from mid 70’s to mid 80’s consisted of private portrait commissions. Until I was about 31, pretty much localized then in eastern Iowa, I thought of myself as a portrait painter. I had learned proper painting technique and had a natural facility for drawing and capturing a physical likeness. Most of my work consisted of privately commissioned oil-on-canvas portraits. Except for charcoal drawings at art fairs, usually subjects did not sit but were rendered from my snap shots. Even then I was aware of the potential for aesthetic shortcomings in "slavish copies" and I did try to get past that. -Midway in this expanse I found myself in school again, this time in Iowa City at the University of Iowa*. I recall meditations alone in the presence of the University's famous Pollock Mural, pondering for what it was I should be doing. After degree work was finished in '81, I intermittently painted portraits as before. It would be a few years yet, around '86, when I would begin working abstractly. 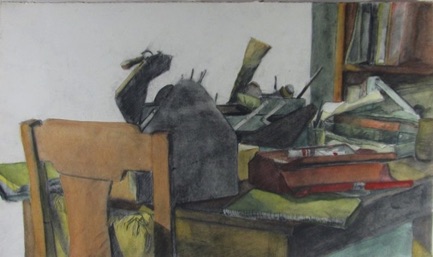 paintings by Hoskins featured in The Acrylic Painter: Tools, Tactics, and Techniques  by James Van Patten -released in May, 2016 /Random House